Brammertz and Janeva receive high recognition from the IFIMES Institute

Brammertz and Janeva receive high recognition from the IFIMES Institute

LJUBLJANA/BLED, 27 November 2017 – The International Institute for Middle East and Balkan Studies(IFIMES) has given the prestigious award »World's Person of the Decade in the Field of Justice« to the chief prosecutor for the International Criminal Tribunal for the former Yugoslavia, Baron Serge Brammertz, while the ICTY Office of the Prosecutor received a high recognition for their exceptional contribution to truth, justice and reconciliation.

The recognitions were handed out by Professor Dr. Ernest Petrič, the Vice President of the Advisory Board of the International Institute IFIMES, a former president of the Constitutional Court of the Republic of Slovenia and a current member and former president of the UN’s International Law Commission (ILC UN). Dr. Petrič stressed the role and significance of the ICTY Office of the Prosecutor and Baron Brammertz, whose work so far has validated the establishment of the ICTY. Through its work, the ICTY has made a significant contribution to the development of international law, especially international criminal law. The legal legacy of the ICTY will be invaluable for further development of international legal profession. Processing war crimes and perpetrators of war crimes is a long-term, almost infinite process. The standards established by the ICTY and the experience gathered will be of great value when processing war crimes in other parts of the world. Unfortunately, many crimes committed in the region remain unprocessed and the perpetrators unpunished and the role of the ICTY, which is ending its work in the present form, will not be discontinued, because it will continue to operate through a residual mechanism, the MICT.

Director of the Institute Dr. Zijad Bećirović also addressed those present at the event, saying among other things that we live in a world of uncertainty, instability and crises which often place the individual/citizen at risk. The role of the institutions of the rule of law in such situations is exceptionally important. Prosecutor’s offices, as part of the overall legal system, act as a guarantee that, in this modern world, no one can evade responsibility for their illegal actions. The role of the ICTY Office of the Prosecutor has restored the hope of the victims of war crimes that they are not left to their own devices and that the prosecution of war crimes will lead to the truth, achieve justice and enable the essentially needed reconciliation and at least minimal satisfaction for the victims.

Director of the Institute Dr. Zijad Bećirović also said that the Office of the Special Public Prosecutor (SJO) of the Republic of Macedonia handles a different kind of crimes, which are a consequence of the “hijacked” state and democracy, or what actually happens in a country where public officials abuse the institutions of the system for their particular agendas. The work of some individuals in the face of hardship has become an inspiration and a model for many. They step forward, they stand out for their expertise, dedication, courage and persistence, and because of that we are honored to be able to recognize them and to express our appreciation for everything they have done for their citizens, countries, the region, the world and a better future for all of us. Most certainly, Serge Brammertz and Katica Janeva are those individuals.

Prosecutor Janeva thanked for the recognition in her own name and on behalf of the SJO staff and added that, in addition to the support of citizens of Macedonia that she receives daily, this recognition will be an impetus and an additional encouragement for her future work. There is still a lot to be done and all of us employed there have made a conscious decision to embark on this demanding work. This recognition belongs to all our staff, but also to citizens of Macedonia, who have initiated democratic changes and the key to those changes is strengthening and developing the institutions of the rule of law. The citizens want legal security and protection. The aim of our work was not only to prosecute those responsible for various crimes arising from illicit wiretapping of citizens, but also to restore the trust of the citizens in the rule of law. Building public trust requires synergy of multiple stakeholders in the society, because the society is a complex system and each piece of that mosaic has and gives a meaning to it. We have pledged to maintain high legal standards and, through the processes we lead, prosecute those who are responsible for acts of crime and thus restore public trust in the institutions of the rule of law. I sincerely hope that the process of Euro-Atlantic integration will bring nothing but benefits to the entire region. We wish for Macedonian citizens to be proud of their country, which has decided to stand up to organized crime and corruption.

The ceremony honoring the awardees was attended by, among others, the IFIMES leadership and other public figures from Slovenia and the region. Participants were addressed by former MEP Jelko Kacin, who emphasized the importance of the prosecutor's offices for reconciliation after the Balkan wars and the construction and strengthening of institutions, which are a prerequisite for a successful transition and Euro-Atlantic integration.

High Representative for Bosnia and Hercegovina (OHR) Valentin Inzko in his letter to IFIMES stressed the contribution of Chief Prosecutor Brammertz to international justice by processing cases involving most serious violations of international humanitarian law. The work of the Office of the Prosecutor and ICTY in general has resulted in extensive documentation of developments in the region of Western Balkans, which contributed to an objective understanding of the events of the 90’. This documentation will serve in support of the objective historical research and to counter denial of crimes and glorification of war criminals, as it is unfortunately today the case.  Inzko also praised the work of Chief prosecutor Brammertz regarding support to victims of crimes from all sides in their search for justice and the contribution of the Office of the Prosecutor  to the process of justice, peace and reconciliation in the Western Balkans.

The entertainment program featured Demeter Bitenc, a veteran of Slovenian film and an internationally recognized actor. 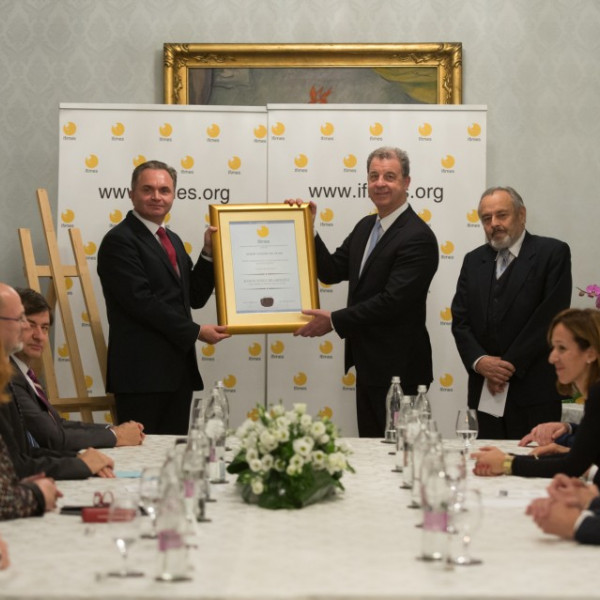 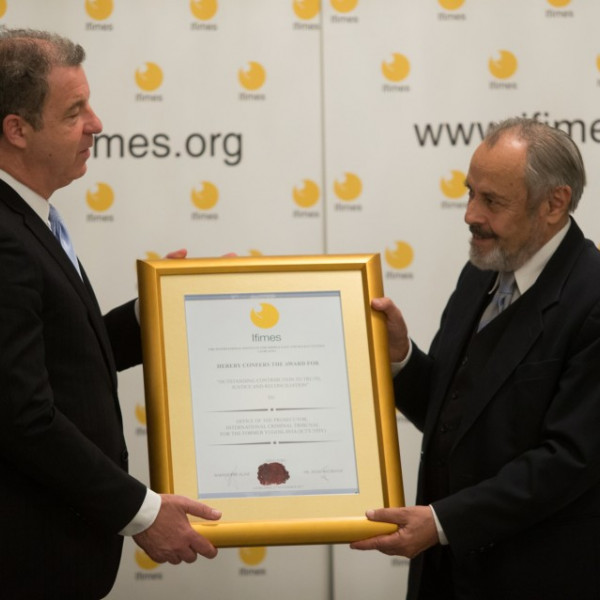 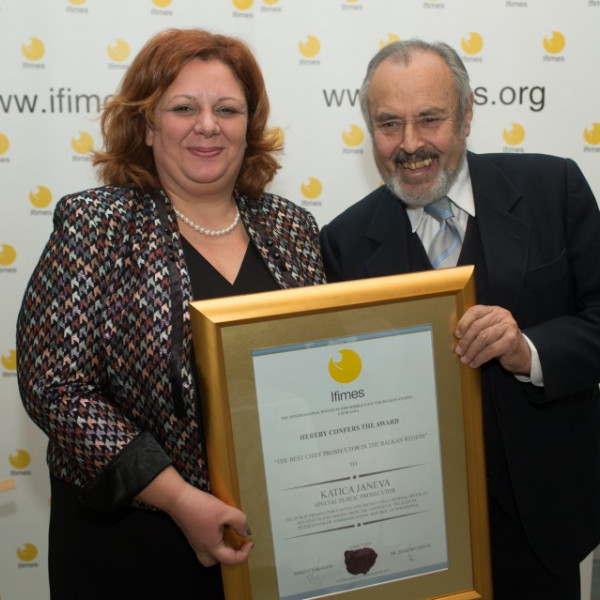 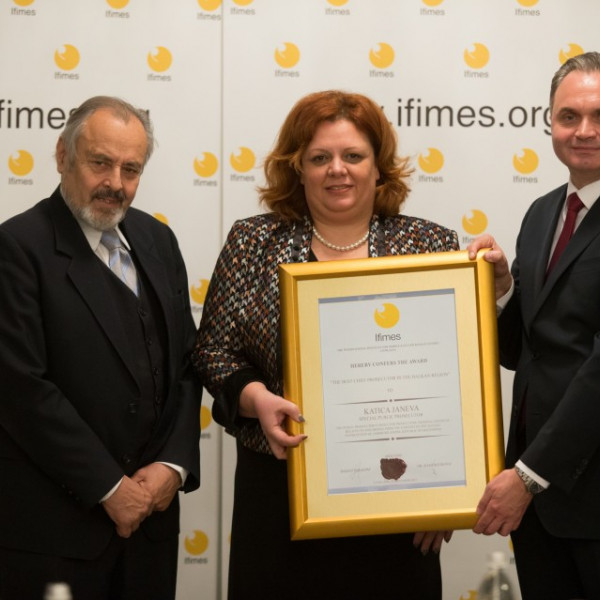 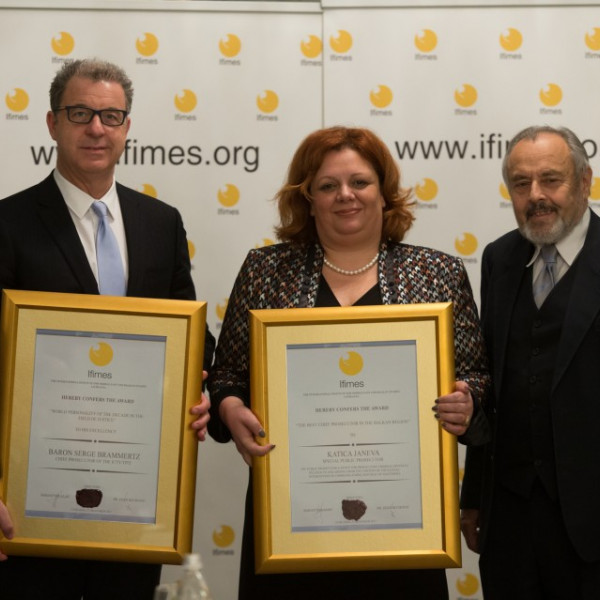 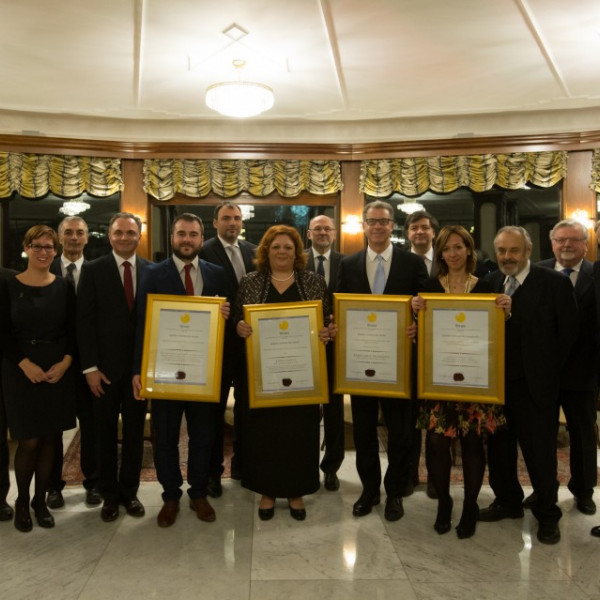 20.05.2022
China – a political view
11.05.2022
China's Economic Development: A Successful Model in the Rise of Nations
28.04.2022
The Chinese Dragon in the Middle East: More Strategic Partnerships and Cooperation
22.04.2022
2022 Parliamentary elections: Slovenia between Brussels and Budapest
21.04.2022
Recontextualization of Ukraine (Return of the Wir wussten nicht)
Your experience on this site will be improved by allowing cookies.
Allow cookies